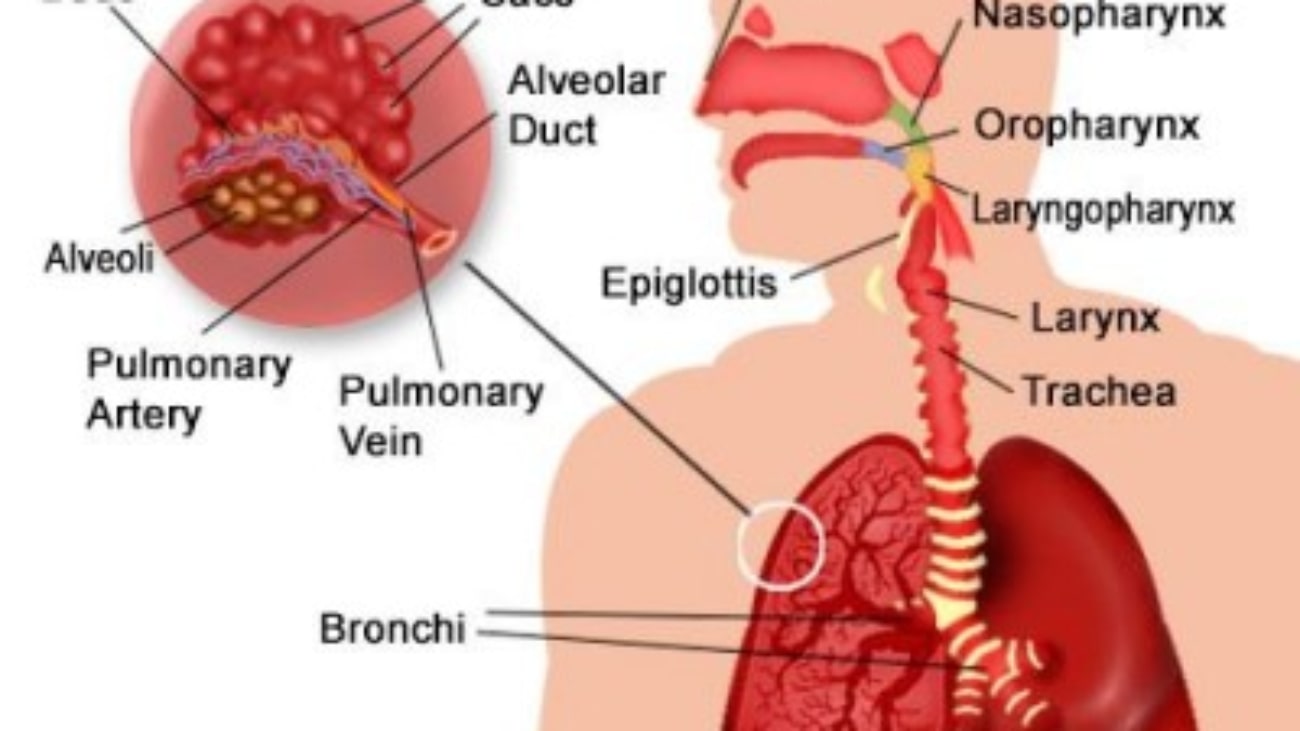 The trachea, commonly called the windpipe, is located below the larynx and ends behind the sternum. It is about ten to twelve centimeters, or about four to four and a half inches long. It is about two and half cm or one inch in diameter. Two bronchi, tubes leading to each lung, branch off from the bottom of the trachea. It is important to understand how the the anatomy of the respiratory system fits together and how the trachea functions within that system.

The ethmoid sinus is located at the roof of the nose, just below the eyes. Its purpose is to filter the area that travels through our nose by the use of ethmoid air cells. This helps prevent particles and bacteria from entering our respiratory system.

The sinuses are located above and below the eyes. The sinuses produces mucus, lightens the front of our skulls, and improves our voices.

The Laryngopharynx is the area where both food, water and air pass. This is where the epiglottis rests when you are eating.

The larynx, also called the voice box, rests above the trachea. Its purpose is to produce the sounds associated with speaking and singing. This is where the hyoid bone, thyroid cartilage, vocal cords, vocal ligaments and the circoid cartilage are located.

The trachea is located between the larynx and the bronchi. Its main purpose is to allow airflow between the head and lungs. Its other functions are explained in detail below.

The bronchi are located at the bottom of the trachea The bronchi are classified as primary, secondary and tertiary bronchi. At the ends of each tertiary bronchi, there are bronchioles. The smallest bronchioles, called terminal bronchioles, which are where oxygen flows between the conduction zone and the respiratory zone. Like a tree, the bronchi branch off into numerous small branches. These allow air to flow throughout the lungs as efficiently as possible.

The main trachea function is to act as our windpipe. When we inhale, oxygen-rich air moves through our upper respiratory, through out trachea, and into our lower respiratory system. When we exhale, carbon dioxide-rich air leaves our body. Without it, our body would simply not be able to breathe.

The trachealis muscle allows the trachea to change its shape. This allows our body to make coughs more forceful. When you clear your throat, you are using your trachea to do so. Cilia, which are hair-like cells, also influence our cough response. When they are agitated, they cause us to cough.

When eating, the esophagus needs more room. The cartilage rings., made from hyaline cartilage, of the trachea allow the trachea to diminish in size. This prevents you from choking on your meals. You are able to feel these C-shaped cartilage rings with your hands.

The connective tissue of the trachea, called adventitia, allows the trachea to change its position in the body. This makes it easier for the body to breathe, by allowing the lungs to expand and contract.

The trachea is lined with a series of goblet cells. The purpose of these cells is to produce a mucus that lines the trachea. This mucus catches potentially harmful debris from entering the lungs. This protective mucus is then brought upwards by cilia. The mucus that you cough and spit out is produced by these goblet cells. When the cilia become agitated by foreign bodies that are too large to be captured by the mucus, they cause a cough response.

If you find that you are experiencing problems with your respiratory system, then speak with a medical professional. Medical complications in this region of your body may become life threatening within moments. Tracheal problems may be signs of more serious medical concerns. These can be due to severe infections, failures of the structure of the trachea, cancer or other potentially life threatening causes.

Your doctor’s will be able to diagnose these medical problems. They will also be able to give you the medications that you will need. If the need arises, surgery may be required. Do not attempt to self diagnose medical concerns of the trachea.